Today my wife and I enjoyed showing around Houston an out of town guest and dear friend from Williamsburg, Virginia. We spent the morning at the Houston Museum of Natural Science, then we took him to lunch at Goode’s Armadillo Palace. It’s very close to the Rectory, where we live, and — well — very Texan.

Tonight I had to “suit up” for an event with some members of my congregation. That phrase was popularized by the character Barney Stinson, played by Neil Patrick Harris, on the television series “How I Met Your Mother.” Barney first uttered those famous words in the show’s pilot, suggesting that others ought to dress like he does to go out. For him, it’s like a superhero outfit. For me, the clothes matched the occasion. Here are my wife and I on our way to the festivities:

The car seat — empty.
But the clergy collar meant
this wasn’t a date.

Yesterday people in Scotland voted on whether their country should remain in the United Kingdom or become an independent nation. Most Americans are more than a little confused about the terminology used to describe the relationships between our friends across the pond in England, Scotland, Wales, and Northern Ireland. Of course, as this essay on the BBC website points out, folks in the United Kingdom are sometimes confused about this too:

It’s a common misunderstanding in the US. The New York Times angered many Scots when it marked Andy Murray’s Wimbledon triumph with a tweet that said: “After 77 years, Murray and England rule”

But before Brits get too sniffy about this equation between Britain and England, we should acknowledge it’s a pretty complicated business and the English are sometimes guilty of the same mistake. A common error is for the British themselves to forget about Northern Ireland by referring to “Great Britain”, which is an island, when really they mean the United Kingdom. (The Northern Irish are “British” without being part of Great Britain.)

And remember that the Isle of Man and the Channel Islands are British, but not part of the UK.

What I think we can all agree about on both sides of the Atlantic is that the national flag of the United Kingdom — the Union Jack — is pretty cool. It combines symbols that represent England, Scotland, and Northern Ireland. Yes, I know, Wales also belongs to the United Kingdom but has never been represented on that flag. I have no explanation for that glaring omission. But I do feel confident explaining that, since the Scots have decided to stay in the UK, the Union Jack remains whole too.

So let’s write haiku about flags this week — the Union Jack, the Stars and Stripes, the Lone Star Flag, etc. Just create a one-verse poem with five syllables in the first line, seven syllables in the second line, and five syllables in the third line. Here’s mine, which refers to the main street in Colonial Williamsburg, affectionately known as “DOG” Street by the locals, and which runs from the College of William & Mary to the Capitol, with Bruton Parish Church at the midpoint:

(Those counting an extra syllable in the first line should note that “Gloucester” is pronounced “Gloster.”)

Inspired by the Senior Associate Rector at Palmer Memorial Episcopal Church, I’ve been trying to branch out now and then with respect to the kinds of socks that I wear with dress shoes. It can be fun to surprise people with bright colors, polka dots, or something a little mischievous. Yesterday I found an unusual pair of socks that does just that in a men’s clothing store near Rice University in Rice Village:

It’s o.k. to laugh. This priest believes a sense of humor is wonderful spiritual gift.

These socks do bring to mind, however, a verse from Romans, chapter 16:

The God of peace will shortly crush Satan under your feet.

Yesterday, of course, was the thirteenth anniversary of the terrorist attacks against the United States on September 11, 2001. One of the things that caught my attention yesterday was a beautiful series of dog portraits that were created by photographer Charlotte Dumas. These were search and rescue dogs that served during 9/11 and, as Dumas has written, “somehow emanated a spark of hope amidst [that] scene of destruction.” The striking part, to me, was the fact that the photos were taken a decade after those terrible events, showing these good and faithful canine servants in their old age. It will bring a tear to the eyes of people who’ve experienced the unconditional love of a dog, especially an old dog, through the many ups and downs that we all face as vulnerable human beings in this life.

The Willard household includes not only a new puppy, named Birdie, but also a nine-year-old, mixed-breed, black Lab, named Tippet. Our mature canine has witnessed lots of changes through the years, and she’s been a source of constant love in the midst of those different chapters in our life together. Here’s a picture that shows both of them and reveals a bit of greying on the muzzle of Tippet:

Tippet, she has watched
our babies turn into boys,
loving them always.

Over the weekend, my wife and I took our two boys to a train show in Houston. Not surprisingly, we saw there a model of “The Texas Special” in motion:

It’s also not surprising that we saw this as part of a train made out of Legos because we’ve learned that Texans love to make all sorts of things into the shape of Texas: 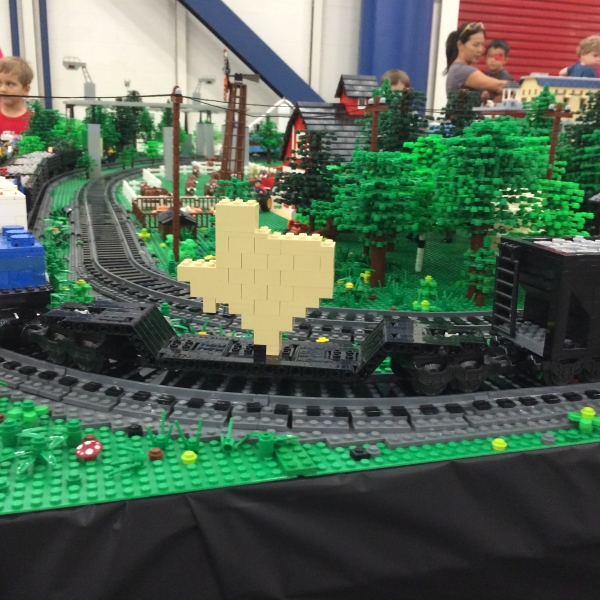 Last night my wife and I attended an open house for parents at our oldest son’s elementary school. He started there a couple of weeks ago. It was great to hear an overview of how he spends his time in class and to see some of his school work.

As I sat on one of the small chairs in his classroom, I thought about Sedge Garden Elementary School in Kernersville, North Carolina, where I went as a young boy. Its old buildings were replaced with new ones that included air conditioning soon after I moved on to middle school. Somewhere I still have part of a brick from those old buildings — a relic, I suppose. Anyway, let’s write haiku about going to school:

Air conditioning
at school used to mean that we
opened the windows.

You can be profound or funny or even a little sad about it. Memories of school days bring with them a wide range of emotions. So pick one of those memories and write one verse with five syllables in the first line, seven syllables in the second line, and five syllables in the third line. Then share it in the comments, remembering that you don’t need to use your real name to participate.

One year ago today, I dropped off my oldest son at kindergarten, walking him to his classroom and entrusting him to the care of his teachers. That afternoon I spoke at the funeral of a ten-year-old boy, the oldest son of someone else who had once done that very same thing as a parent. His family had asked me to do that as a person of faith, even though the service itself was non-religious. What we had in common was an understanding that our children are gifts and that we have to let them go. It’s not fair when that happens through an untimely death.

Some people will say that I should have talked more about my faith and the God that I believe entered into the muddy waters of our humanity in Jesus. Others will think the opposite, saying that I stepped out in faith too far. If I crossed a sacred boundary, it was because I was invited to do so by parents who not only cared about their first-born child but cared about others who loved him too.

Love, therefore, became the thread that made a connection between all of us. It brought to mind the opening words of a beautiful antiphon that I didn’t quote in my remarks but have contemplated a lot: “Ubi caritas et amor, Deus ibi est,” which means, “Where charity and love are, God is there.” This I believe.

Here’s what I said: END_OF_DOCUMENT_TOKEN_TO_BE_REPLACED

In August my family and I were visiting the home of some friends for dinner. While there, I walked into their backyard and saw, with awe and amazement, this: 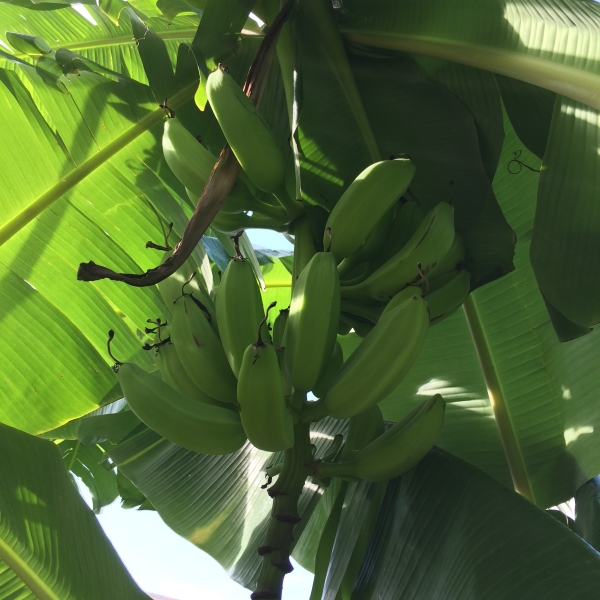 That’s right, there were bananas growing in their backyard! I’m still getting used to seeing things like this growing outside of people’s houses in this region of Texas — lemon trees; avacado trees; giant, prehistoric-looking palm trees, etc. The couple who a few years ago planted the banana tree in this photograph harvested those bananas last week. Naturally, since they also have young children, I thought of the “Banana Song” by the Minions, which I will now share with my devoted followers: