My wife and I celebrated our eleventh wedding anniversary last Saturday. Actually, we celebrated with a nice dinner at Brennan’s of Houston the night before that. On the night of our official wedding anniversary, we were at St. Mark’s Episcopal Church, eating popcorn and tacos while watching the movie Star Wars with our kids. Also, while there, I pulled a loose front tooth for our oldest son. True story. 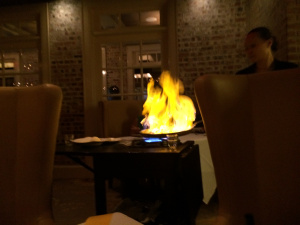 But the meal at Brennan’s was more than satisfactory. For dessert, my wife ordered their famous bananas foster. It was not only tasty but also entertaining since that dessert was served flambé tableside. As they state on their website: “This show-stopper is justifiably No. 1 in the hearts and appetites of legions of our guests.”

Molina’s pralines
after Tex-Mex. I love them
a little too much.