Well, it appears that the equivalent of a meteorological bomb is about to explode across the Northeast. The National Weather Service has issued blizzard warnings for counties from New Jersey to Maine, with folks in Boston preparing to wake up on Wednesday morning to as much as three feet of snow on the ground. Media reports describe this approaching storm variously as historic, crippling, life-threatening, etc. As the Governor of Rhode Island put it, “We believe this storm is so severe that it poses an imminent threat to the safety of our citizens.” The warnings have been both consistent and dire. My hope is that people will take them seriously.

For me, that brings back memories of the so-called “Storm of the Century” in mid-March of 1993. It was described in the New York Times as “a monster with the heart of a blizzard and the soul of a hurricane.” Because of the snow, I was stuck for three nights at a Holiday Inn off the New Jersey Turnpike on my way back from North Carolina to Connecticut during my first year at Yale Divinity School. Freemasons — a lot of them — from New York City were also stuck there. They had a party. 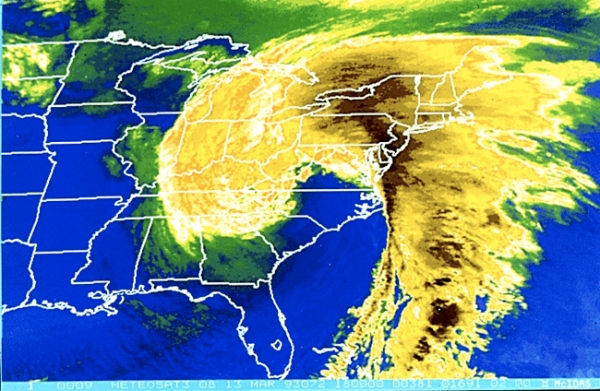 I remember, too, that hundreds of people died as a result of that 1993 “Storm of the Century,” and there will surely be too much suffering as this new mega-storm develops. So here’s a prayer for tonight and for the dark nights that await us all:

Keep watch, dear Lord, with those who work, or watch, or weep this night, and give your angels charge over those who sleep. Tend the sick, Lord Christ; give rest to the weary, bless the dying, soothe the suffering, pity the afflicted, shield the joyous; and all for your love’s sake. Amen.