Have you not known? Have you not heard? The Lord is the everlasting God, the Creator of the ends of the earth. He does not faint or grow weary . . . (Isaiah 40:28)

Those words were written for the exiles of ancient Israel — people who were on the verge of forgetting their own story. They felt overwhelmed by the forces of the world around them — the false gods of political power and military might, the experience of exile and loneliness, and the fear of abandonment. They had grown weary over many years away from home. And they were starting to forget the story of God’s faithfulness, the story of God’s steadfast love toward their ancestors. Having been dislocated geographically, they were now dislocated spiritually.

Surely that sense of disorientation describes a lot of us too. Our television and computer screens are filled with news of violence and brutality, including brutality against children, by ISIS in the Middle East and by Boko Haram in Africa. And then we woke up last Monday to hear on the local news about violence and brutality in our own backyard. The Rev. Israel Ahimbisibwe, his wife Dorcus, and their youngest son, Israel, Jr., whom they called Jay and who was only five years old, had been murdered in their apartment — beaten to death.

Israel was a native of Uganda, where he was ordained as a priest in the Anglican Church of Uganda. He served both as a chaplain to the University of Houston and as the Vicar of the Episcopal Church of the Redeemer. He also had, in addition to degrees from Princeton Theological Seminary and Harvard Divinity School, a Ph.D. in Old Testament from Rice University.

All of this was very much on the minds of folks on Tuesday morning at the Men’s Bible Study and our weekly staff meeting here at the church. That’s partly because some of you remember Israel from the time he was just beginning his studies at Rice. For his dissertation, Israel studied the genocide that took place in Rwanda in 1994, writing about the senseless killing of family and neighbor — by Christians — and the transformative power of the Torah to prevent a repetition of that kind of senseless killing. The fact that he and his family became victims of that very thing is horrifying.

As most of you know, Israel’s oldest son, Isaac, has been arrested and charged with capital murder in this terrible case. The only other surviving son, Emmanuel, is about to graduate from a prep school in California. So Isaac and Emmanuel will now walk through this valley of the shadow of death without their parents, without their youngest brother, and without traveling side by side on the long road that lies ahead of them. It’s a journey of grief, sorrow, pain, forgiveness, repentance, and — yes — justice that will exhaust them.

In the midst of our weariness, Isaiah reminds us that God “does not faint or grow weary.” He reminds us that God created the earth, stretched out the heavens, and yet still recognizes each star in the celestial canopy. Those things — those realities — point to the true seat of power in contrast to the claims of the princes and rulers of this world.

The God of creation will loosen their grip on the weak. According to Isaiah, “[The Lord] gives power to the faint, and strengthens the powerless.” We’ve seen this take place in the story of Israel and in the story of the Church. We’ve also seen it happen in the stories of people around us, in our own friendships, in our own households, and here in our own parish family.

I thought about Isaiah’s bold statement last Thursday, as friends and colleagues of the Rev. Israel Ahimbisibwe gathered across the street in Rice Memorial Chapel to remember him and his family. There we sang the familiar hymn Amazing Grace, with some of us believing its words to be true, while others — perhaps in exile from an earlier life of faith — might have wished, if only for a moment, that they could believe its message in the midst of things that none of us can understand.

Amazing Grace
How Sweet the Sound

That saved . . .
A Crack Head
Drug Addict
Alcoholic
Meth Freak
A Wretch
Like Me.

I once was . . .
Homeless
Broken
SadJust Lost

Was blind but now I see.

Then, at the very end, the voice of a narrator says:

Every day shattered lives are restored, thanks to the goods you donate to the Salvation Army.

It was, in many ways, like an ad for the reign of God. It represented the kind of diversity that’s described in the biblical vision of the heavenly banquet.

And something else came to mind too – an unusual poem about the founder of the Salvation Army, a man who became blind late in life. That poem, entitled “General William Booth Enters Heaven,” describes the old man being reunited with those to whom he had reached out with Christian compassion. Here’s the part that reminds me of the community invited by Jesus the Christ, the Messiah, to feast with him:

Jesus came from out the court-house door,
Stretched His hands above the passing poor.
Booth saw not, but led his queer ones there,
Round and round the mighty court-house square.
Then in an instant, all that blear review
Marched on spotless, clad in raiment new,
The lame were straightened, withered limbs uncurled,
And blind eyes opened on a new, sweet world. . . .

He saw King Jesus; they were face to face,
And he knelt a-weeping in that holy place.
Are you washed in the blood of the Lamb?

My friends, the Rev. Israel Ahimbisibwe was washed in the blood of the Lamb, who has taken away the sins of the world. And he believed in this biblical vision of the heavenly banquet. He knew that his God, in the words of Isaiah, “does not faint or grow weary.” As he told his bishop, our bishop, the last time they met, “I am filled with great hope.”

I first heard about Israel’s study of the Rwandan genocide from a professor of Hebrew Bible who spoke at the memorial service last Thursday. That professor also shared with us a prayer from St. Augustine’s book The Confessions:

Creator God, O Lord of all,
who rule the skies, you clothe the day
in radiant color, bid the night
in quietness serve the gracious sway
of sleep, that weary limbs, restored
to labor’s use, may rise again,
and jaded minds abate their fret,
and mourners find release from pain.

That’s a beautiful prayer. It brings to mind the words of Isaiah about God, who not only “stretches out the heavens like a curtain” but also renews the strength of those who wait for him here beneath the starry sky. Even when overwhelmed by grief and sorrow . . .

. . . they shall mount up with wings as eagles,
they shall run and not be weary,
they shall walk and not faint.

Yesterday afternoon, a little north of Houston in The Woodlands, the 166th Annual Council of the Episcopal Diocese of Texas adjourned. Our clergy and lay delegates from Palmer sat directly behind the folks from the Episcopal Church of the Redeemer in Houston. 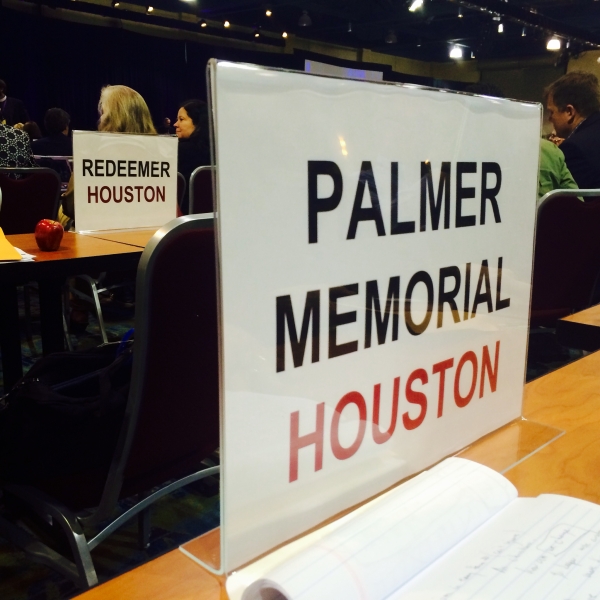 So the Rev. Israel Ahimbisibwe should have been sitting at the table in front of us. But I will meet him at another table, face to face with King Jesus. This I believe.

My God “does not faint or grow weary,” so I am filled with great hope. Let us pray:

O God, who brought us to birth, and in whose arms we die, comfort us in our grief and shock at the violent deaths of Israel, Dorcus, and Jay. Surround us, the people of the Episcopal Church of the Redeemer, the Episcopal students at the University of Houston, and both Emmanuel and Isaac with your love; give us all hope in our confusion and grace to release Israel, Dorcus, and Jay into the embrace of your mercy; through Jesus Christ, our Savior and Lord.

One thought on “Meeting at the Table with King Jesus”