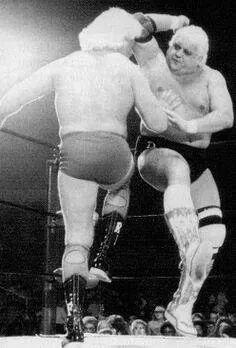 Yesterday Texas-born, “pro wrestler” Dusty Rhodes (a.k.a. “The American Dream”) died. Over on Twitter, Ric Flair (a.k.a. “The Nature Boy”) referred to Rhodes as a mentor and expressed love both for Rhodes and for his family.

My previous congregation was located in Edina, Minnesota, which happens to be Flair’s childhood home. Fake-sports-oriented Episcopalians will surely remember him as the most stylish “pro wrestler” of the 70s and 80s.  Flair is looking away from the camera in this photograph in the ring with Rhodes.

It’s shocking to me — not really — that so many red-blooded Americans have never heard of “The Nature Boy” and his professional colleagues. I suppose this was what passed as so-called reality TV when I was a kid. Here’s a bit of what they’ve missed:

While it might not include “The Nature Boy” or “The American Dream,” most of us have a list of various personalities on TV that we’ve come to know, in a sense, over the years. These are characters that we admire, hate, pity, feel kinship with, laugh at, etc. Let’s write haiku about them since that’s our theme for this week. Just use five syllables in the first line, seven syllables in the second line, and five syllables in the third line. You can even share it here as a comment. And have fun, like I did: