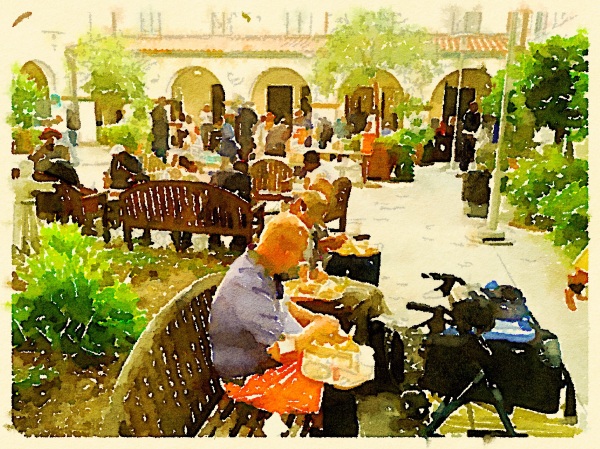 For nearly a quarter of a century, Palmer Memorial Episcopal Church has fed the homeless in its courtyard each morning during the workweek. Known as The Way Station, that homeless ministry has served more than a million meals to those in need thanks to the efforts of dedicated volunteers from the congregation and the community. After this morning, the context for Palmer’s outreach to the homeless will shift geographically as we join forces with the Star of Hope Mission, which helps homeless men, women, and children on multiple campuses in Houston.

Palmer and Star of Hope are both major partners of The Way Home, which is the city’s blueprint to prevent and end chronic homelessness through housing and coordinated services. You can read more details about these changes and the new relationship between our two organizations in my letter to the congregation, in my letter to neighboring institutions, and in this update from the City of Houston.

In the meantime, more than a few tears were shed this morning on the last day that meals will be served at The Way Station. As our volunteers and clients gathered by the gate into the church courtyard, I offered these words as my prayer for all of us:

We pray that not only their lives but also the lives of the rest of us will be transformed by the grace and love that we see in the outstretched hands of the clients who are about to walk through these gates, in the efforts and good work of the volunteers gathered in this courtyard, and, above all, in the merciful presence of our Lord and Savior Jesus Christ.

We ask all of these things in the name of him who said, “Truly I tell you, just as you did it to one of the least of these who are members of my family, you did it to me.” Amen, amen, and amen.

Let’s write haiku this week about loving our neighbors. It doesn’t matter if you describe a dramatic act of love or a seemingly insignificant one. Tell us about that experience in one verse with five syllables in the first line, seven syllables in the second line, and five syllables in the third line. Today the neighbor who received love, unexpectedly and undeservedly, like a reflection of God’s love, was me:

Soon after I prayed,
a woman reached out her hand
to “feed” me with thanks.