The Houston Livestock Show and Rodeo is in full swing, and one of the events there is called Mutton Bustin’. An announcer gives the name of a kid between the ages of 5 and 6 and tells the audience what that kid wants to be when she or he grows up. We heard about cowboys and fire fighters and, interestingly, Secretary of the Treasury. Then a gate is opened, and that same kid tries to hold on tight to a sheep that bolts to the other end of the arena. It only lasts for a few seconds, but — wow — what a ride! 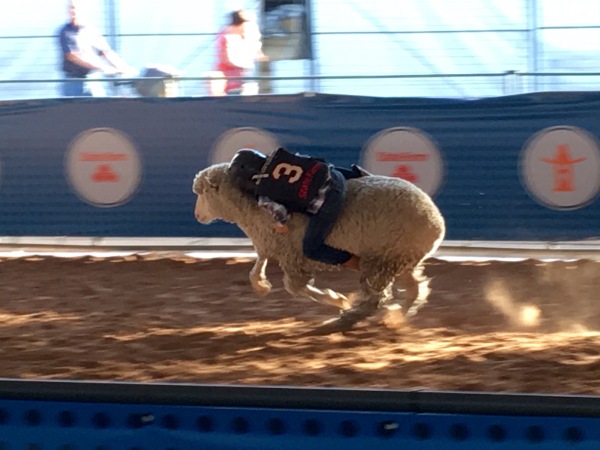 I would image that Mutton Bustin’ is both thrilling and terrifying at the same time. There are all kinds of wild rides — race cars, roller coasters, a ship rolling with the waves, driving 30 miles per hour on an endlessly curvy road in the mountains, riding in a helicopter across the edge of the Grand Canyon as the ground below suddenly drops away from view, etc. Write a haiku about your experience with five syllables in the first line, seven syllables in the second line, and five syllables in the third line.

Saw bucking broncos
at the Houston Rodeo.
That’s not for me, y’all!