Lord, we pray for the one who preaches. For you know his sins are many. Amen.

As you came into the church this morning, there were probably a few things that caught your eye, like the brand new, bright yellow lines in the south parking lot and glorious sunflowers shining over the altar on both sides of the cross and festive t-shirts worn by many of our members who will be sent out at the end of worship in groups to serve our neighbors on Serve Sunday. Some of the shirts say “God Thinks You’re Fabulous,” which, for us, is another way of saying that we believe God looks at people, who’ve been created in his own image, with the eyes of Jesus and loves them. We are all forgiven, embraced, and accepted in the merciful arms of our Savior.

But there’s one other thing. Unless today is the very first time you’ve ever walked into this beautiful house of worship, you probably also noticed, and perhaps keep staring at, the baptismal font. That’s the impressive stone bowl on a pedestal where people, young and old, are baptized with water and adopted into the household of God. Yes, it has indeed been moved. That is the truth. The whole truth, however, is that it’s been moved back to where it used to be. So the balance between Water and Word, which is to say the font and the pulpit, has been restored at the front of the church. Now we’ll pass through both of those things that are constantly shaping our Christian life as we come to the Table in the middle to bless the bread and the wine for holy communion. I’ll say more about the baptismal font in a moment.

But, first, a story. The first ordained minister that I can remember at Union Cross Moravian Church in Forsyth County, North Carolina, wasn’t the one who baptized me as a baby but the pastor who followed him. He was the Rev. Edward T. Mickey, and we called him Mr. Mickey, in the same way that Episcopal priests used to be addressed universally in past generations in America. He was just as talented, if not more so, in the realm of music as he was well-read in the area of theology. 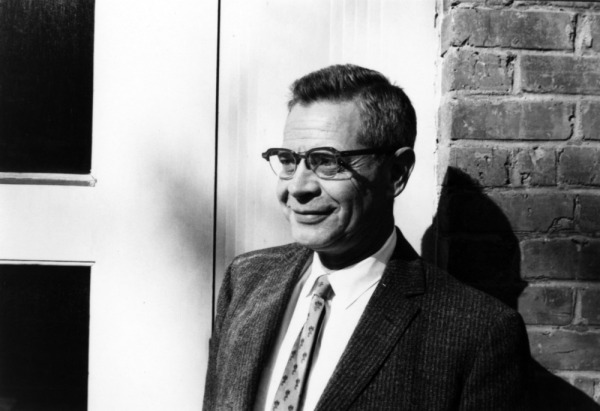 Mr. Mickey had once been the Pastor of Grace Moravian Church in Mount Airy, which is located in the foothills of the Blue Ridge Mountains. And that’s where, on a Wednesday afternoon in 1942, he heard the sound of a bicycle come to a sliding, screeching stop at the back door of the church. Riding that bike was a 16 year old boy who saw Mr. Mickey sitting there on the back steps and wanted to know if he was the preacher. He said that he was. The teenager then asked Mr. Mickey if he could teach him how to play a trombone so that he could lead a swing band.

That teenager turned out to be the future actor Andy Griffith, who did learn all about music in that church — how to read it, how to play it, how to sing it. That was a real turning point in the life of Mr. Griffith, who would later major in music in college at Chapel Hill before the start a well-known career in entertainment.

In the letter that slowly made its way to that city, those Christians are simply being reminded that their community of faith ought to be oriented around something else, something that is life-giving not only for themselves but also for others:

. . . be filled with the Spirit, as you sing psalms and hymns and spiritual songs among yourselves, singing and making melody to the Lord in your hearts, giving thanks to God the Father at all times and for everything in the name of our Lord Jesus Christ.[1]

And is it not here, within these walls, where we learn how to sing in the world? For us, that begins at this font, which the infant Jesus, being held in the arms of his mother, now overlooks and blesses. Can’t you hear, if only faintly, the song of his mother, the song of Mary? Out of the baptismal waters, her words become our own:

My soul doth magnify the Lord,
and my spirit hath rejoiced in God my Savior. . . .

He hath showed strength with his arm;
he hath scattered the proud in the imagination of their hearts.

He hath put down the mighty from their seat,
and hath exalted the humble and meek. . . .[2]

And when we go out these doors to serve others, it’s just an extension of singing this and other songs we’ve learned in one another’s presence. But it all begins, for us, at this font, and I love how the author and pastor Eugene Peterson describes that:

Baptism marks a radically new way to understand ourselves and one another: not by race, not by language, not by parents and family, not by politics, not by intelligence, not by gender, not by behavior. All of these various ways of accounting for ourselves are significant, but none is definitive. Holy baptism defines us as holy, as saints. Baptism is definitive . .

The font in a church ought to invite exploration, not be half-fenced off as ours often seemed like it was when it was in front of the pulpit. Now you can freely walk around the entire font. And so not only children are encouraged to come and do that but also adults. If you have little ones, lift them up so they can see with their own eyes the inside of the bowl. Then take a look at the symbols outside that basin and notice, in particular, the eight sides of the base. It’s important for that not to be obscured.

That octagonal shape was a symbol in early Christianity of the resurrection, with the Lord’s Day, Sunday, being not the first day of the week, as we usually think of it, but the eighth day of creation. It reminds us of a new creation, a new song, that began at the empty tomb on Easter morning and that begins, for us, at this font as people of all ages, from infants to the elderly, are baptized, bathed in forgiveness, washed lavishly in God’s grace, named publicly as God’s beloved children.

On Friday afternoon, as I was driving both of my boys to their music lessons, the radio in the car was tuned in to NPR and the first thing that I heard was the classical violinist Yo Yo Ma was being interviewed. Actually, what I heard first was him playing the gently rolling prelude to the first of Bach’s six Cello Suites. Mr. Ma started violin lessons at four years of age, and the first several notes of that prelude are what he learned on his first day. The next set of notes are what he learned on his second day, and so on and so forth. He learned all of it slowly, incrementally.

The music of Bach’s six Cello Suites have been his companion for the last 58 years. That music, like the Book of Psalms in the Bible, is, as NPR put it, “two-and-a-half hours of sounds that map humanity in all its triumphs, joys and sorrows.”[4] Mr. Ma has played that music at the weddings of his friends and also at their funerals. He played it after 9/11 and on very different kinds of celebratory and joyous occasions.

I think that’s a beautiful image of how we learn to sing the right notes throughout the different chapters of our lives, the lives of our loved ones, and the lives of our neighbors. And how could I speak of singing on this Lord’s Day without mentioning, with R-E-S-P-E-C-T, Aretha Franklin, who died on Thursday in the City of Detroit?

I loved this title of an article in the New York Times last week: ‘Amazing Grace’: How Aretha Franklin Took Us All to Church.[5] Her father was a Baptist minister, and, not surprisingly, she used to sing gospel music in his church. Although the Times piece was about a particular album called Amazing Grace, there’s something about the way Ms. Franklin sang that carried much of that out into the world, even if the words she was singing weren’t religious in any way, shape, or form. There was a sense that we were going to church. And when she sang at the Presidential Inauguration in 2009, she wore a magnificent hat, as though she had dressed for church on that day.

Now some of you are thinking to yourself, “I’m never going to be like Yo Yo Ma on the cello or the Queen of Soul with my voice,” even metaphorically.  So I want to tell you the part of the story about Mr. Mickey and Andy Griffith that usually gets left out. In his own retelling of it, Mr. Mickey said he was sitting on the back steps of the church that afternoon in 1942 at what seemed like a real low point.[6] He had just finished his weekly band practice with his volunteer players, and they hadn’t practiced and didn’t seem very interested. And so he was feeling sorry for himself as he sat there.

In The Player: A Profile of an Art, which is a 1962 collection of reflections by actors, Mr. Griffith wrote these words:

For three years, he gave me a free lesson once a week. Ed Mickey taught me to sing and to read music and to play every brass instrument there was in the [church] band, and the guitar and the banjo besides. I was best at playing the E-flat alto horn.

When I was sixteen, I joined the church, together with my mother and daddy. . . . I was very happy with the Moravians. All the other band members accepted me. They didn’t ever make fun of me.[7]

And that’s what each of us can share with others, the song that each of us, being filled with the Spirit, can sing in the world beyond these walls. . . today.

3 BACK TO POST Eugene H. Peterson, Practice Resurrection: A Conversation on Growing Up in Christ (Grand Rapids, Michigan: Eerdmans, 2010), 83-84.

4 BACK TO POST Mary Louise Kelly and Tom Huizenga, “Yo Yo Ma, A Life Led with Bach,” NPR, August 17, 2018. See also the transcript of that interview.