Worthy is the Lamb that was slain to receive power, and riches, and wisdom,
and strength, and honour, and glory, and blessing. (Revelation 5:12, KJV)

Lord, we pray for the one who preaches. For you know his sins are many. Amen.

So a weird thing happened to me recently. Several months ago, I stumbled across a short list of papers that are in the Moravian Archives in Bethlehem, Pennsylvania. They are some of the writings of John Philip Meurer, who was not only a Moravian minister but also my 6th great-grandfather. The list included a poem from 1744.

I was really curious about that and received an enthusiastic response from a young researcher who wrote back to me. He said it had apparently been miscatalogued because, as it turns out, it’s really a 37-verse hymn. The numbering skips from verse 24 to verse 26, so I guess there are only 36 verses. And it’s now been translated from German to English if we want to use this “shortened” version next Sunday as our processional hymn. Fear not, that won’t happen! However, I will quote part of it today, beginning with the second verse, which refers to Jesus Christ as the Lamb:

When I consider the previous time,
the trouble the Lamb has taken with me
when I brought him very little joy,
his heart still burned with love.

The dear Lamb redeemed me,
forgave me my sins.

That contrast between the Lamb and my 6th great-grandfather, or anyone else who is an imperfect human being, which is to say the person sitting next to you, is fully on display in this morning’s reading from the Book of Revelation. The one who is worthy to receive honor and glory and blessing is neither among “the myriads of myriads and thousands of thousands” of people who are singing nor on the throne of the Roman emperor who demands total loyalty and worship as a god. Only the Lamb is worthy to receive all of that, and the Lamb, as in Meurer’s hymn, is Jesus Christ. 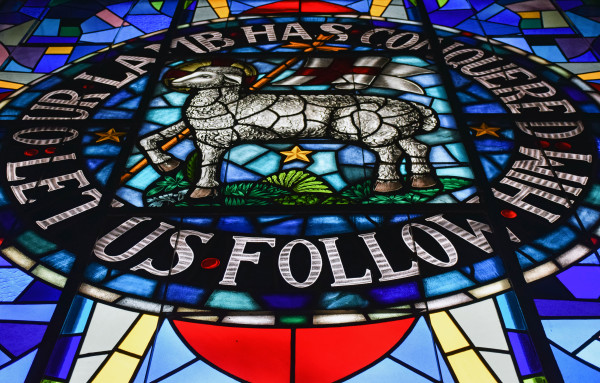 Sadly, the Book of Revelation has been used to terrify people, filling them with fear about the news of the day. It’s meant to say that, yes, God will have the last word over all the terrible things that happen and will continue to happen in this world. But it’s also meant to provide encouragement for those who are struggling, even a sense of wonder that Christ’s death and resurrection — what Meurer later describes in his hymn as “our dear Lamb’s wounds” — are somehow able to untangle the knots within us and around us. Before receiving communion, we often proclaim the same message, singing that Jesus is the Lamb of God who takes away the sin of the world.

The Book of Revelation, by the way, heartily endorses singing, as if to say that in the midst of humanity’s cacophony, and after all of that disharmony has ended, singing will have carried us through it and remain with us beyond it. There are more than 15 hymns sung in this book, surrounding us with encouragement from behind the curtain of materiality. Yes, some things are seen. Others, just as real, are unseen.

Near the end of the Book of Revelation, there’s another biblical image of the Lamb that appears, painting a vivid picture for us of what heaven is like. It’s the marriage supper of the Lamb — a wedding feast, which, in the ancient world, was a kind of dinner that went on for days, overflowing with abundance. There, at the end of the Bible, it’s a party hosted by Jesus. And it’s a party to which all of us are invited. Angie and Stuart Kensinger, whose double funeral was held in this church last week, used to host fabulous dinner parties in their home. And they’d print menus for these fun events. Here’s one of them. The Anglican Archbishop in Jerusalem attended this particular dinner, and he was invited to sign a copy of this so the Kensingers could keep it as a memento. That’s not surprising. But what is surprising is that the Kensingers asked every other person at the dinner to sign that menu, too, as though we were all celebrities. It was then framed and hung on a wall in their kitchen.

Those walls are filled with these framed menus. My wife Carrie had this to say about that in an essay posted on Mockingbird on the day of Angie and Stuart’s funeral:

Every time there was a new dinner party, a new menu would be printed, signed, and framed, and they would squeeze the other frames together and rearrange to make space for the new one. There wasn’t ever a sense that they’d run out of room for more menus, even as the walls filled with memories — they’d simply make more room. I imagine that the [Jewish, Christian, and Muslim] young people in Jerusalem Peacebuilders and [the girls] on Angie’s lacrosse teams felt the same way that I did — we all knew there was enough room in the Kensingers’ hearts for all of us. We all just squeezed together to make more room.

I imagine that the kingdom of heaven is not unlike Stuart and Angie’s kitchen, with its walls filled with signed menus. There will be someone who is always, always glad to see us and treat us as an honored guest. There’s no fear that the host will run out of room, and old friends will squeeze together to make room for new ones.

That’s a beautiful portrait, I think, of how our life together with God might look. Now and then we get to have a glimpse of it here, where our songs and laughter and feasting and friendship and small acts of love are like a thunderous chorus of praise to the Lamb who was slain. And sometimes we’re overwhelmed with a very real sense that those who have died, having fallen asleep in Jesus, are still with us, and not just in our memories. They are among “the myriads of myriads and thousands of thousands,” encouraging us as they sing to the Lamb and surround the throne of God with their own Easter alleluias. That, my friends, is the communion of saints.

My first experiences of that happened as a child in North Carolina at the Moravian Easter sunrise service. The service always began in front of the church and ended in the graveyard as we stood with the saints, living and dead. I also felt it as a teenager when I crossed the threshold of an Episcopal church for the very first time at St. Thomas, Fifth Avenue, in New York City. That parish church moves from plainness to glory in two directions, from bottom to top and from the back to the front. And there at the front is one of the world’s largest reredoses — an ornamental screen behind the altar, brightly illuminated and highlighting a multitude of saints. It was while looking at them that I first heard an Episcopal priest sing these words:

Therefore with Angels and Archangels, and with all the company of heaven, we laud and magnify thy glorious Name; evermore praising thee, and saying, “Holy, holy, holy, Lord God of Hosts: Heaven and earth are full of thy Glory.” 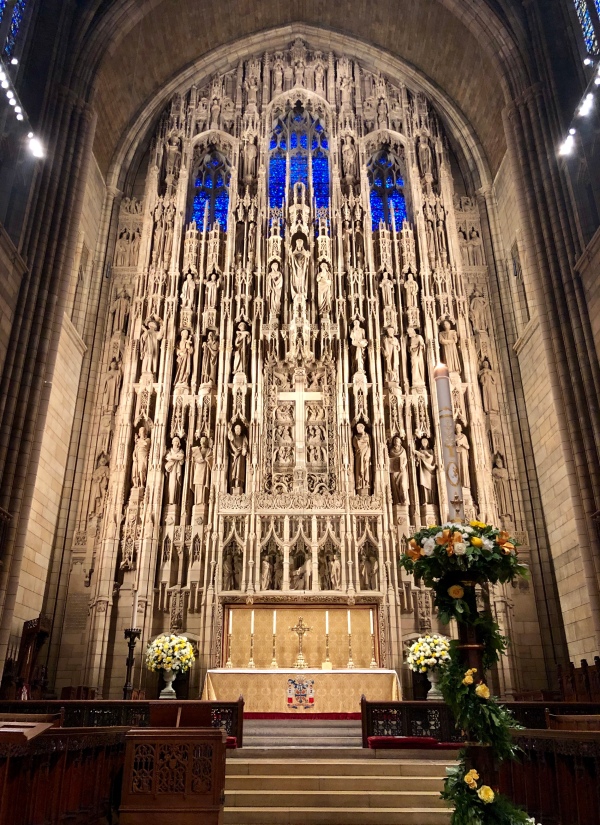 Last Sunday morning, my wife and I were in New York City and attended the 11:00 Festival Eucharist at St. Thomas. While hearing those now familiar words and looking at that reredos soaring heavenward, I thought about the past, just like John Philip Meurer did in the words of his hymn, and how Jesus has always been close to me in love, even when — especially when — I wasn’t aware of it. And I also thought about the saints of God here at Palmer who’ve died. We’ve buried three of them from this church during this season of Easter, with three more funerals to be held over the next couple of weeks. Others are mourning the loss of close family members. It’s too much to bear. Yet the love of Jesus sustains us as we sit in the shadow of death.

As a friend of mine recently said to me, “The love of Jesus precedes everything else, and the love of Jesus creates love within us.” And that divine love that fills our hearts within these walls is the same love that overflows into the world beyond these walls. That’s the love that goes with us today as we step onto Main Street. This I believe.