More than a decade ago, weeks after my daddy’s burial, a recumbent headstone of white marble was placed on his grave. It’s four inches high, twenty inches wide, and twenty four inches in length. I know that because his headstone is exactly the same size as all the other headstones for adults who are buried in that church cemetery, which in the Moravian tradition is always referred to as God’s Acre. There in God’s Acre, those asleep in Jesus await the dawn of a new day — the Last Day — when the dead shall be raised, when wrongs, including the ones within us, shall be righted, and God shall be all in all. There in God’s Acre, we need not fear our coming Judge.

Whether at a large church or a small church, out in the country or in the middle of a city, there’s a peacefulness about God’s Acre that comes from its uniformity and simplicity. The headstones represent equality within the community of the church and the fact that God shows no partiality. Saint or sinner, rich or poor, famous or not, everyone is loved and redeemed, and will one day be raised, in the same way, by the same God. It’s as if the God who created us, and more wonderfully redeemed us, has drawn a circle of divine love around the whole congregation, where all are safe.

Having described the power of that symbolism, you can imagine my disappointment and confusion the first time I was old enough to walk alone around the outside of another Moravian church, which sits right on Main Street in my hometown. At first glance, that God’s Acre looks the way it should look. But at one edge is a somewhat triangular section, separated from the rest of the graveyard by a brick wall.

Peering over the wall, I could see that only members of the Körner family, for whom the Town of Kernersville is named, were buried inside. My religious idealism was, if not shattered, at least bruised. I wasn’t so naive not to understand this was how things normally worked in the world — prominent people get the spotlight shined on them both in life and in death. But I didn’t expect to see that in God’s Acre, which was supposed to reflect how things worked in a kingdom not of this world.

Since then, I’ve come to learn, as most of us eventually do, that there is sometimes an enormous difference between the truth and the whole truth. And the whole truth about that brick wall behind Kernersville Moravian Church relates to the life and death of a woman named Clara. A descendant of both Africans and Native Americans, Clara was enslaved from the moment of her birth in 1820. When she was 14 years old, she was hired out to help the family of a man named Philip Körner.

Although Philip had been raised in the Moravian Church, his wife’s family were Quakers. And it was because of the Quaker convictions within his heart that Philip, several years later, purchased Clara, not to own her as a piece of property until her dying breath, but to make possible her eventual freedom.[1] Clara continued to work for the Körners, taking their name as her own, and became especially close to the youngest son named Jule after his mother died when he was only two years old. My fourth great-aunt became Philip’s second wife, but Clara was Jule’s second mother.

That little boy grew up, and he built a house on the other side of the street from the Moravian church, ridiculed by others as Körner’s Folly — a nickname Jule embraced with glee. It’s an amazing example of extravagant Victorian architecture, with 15 fireplaces, no two doorways or windows alike, a ball room on the second floor, and a theater on the third floor with a beautifully painted ceiling that soars as high as 25 feet. A local newspaper said Jule was an “uncompromising Lincoln abolitionist,” and each year on the anniversary of Abraham Lincoln’s death, black swags were hung across the windows and porches of the house, partly in respect for Clara, who lived nearby. The theater was built for children to create and present performances on a stage, complete with a chamber orchestra. So this fanciful house was really open to the community. And it wouldn’t be too far of a stretch to say it was like a church, especially since Jule believed art and music were human expressions of the divine.

In fact, a large crowd gathered on the lawn of Körner’s Folly for a funeral in 1896. Both the crowd and the ordained ministers present included whites and African Americans. They were there to give thanks to God for the life of Clara Körner. And they were standing in that yard on the other side of the street from a church that had refused to allow this formerly enslaved woman to be buried in God’s Acre.[2]

The Körner family, especially Jule, was furious about that. So he purchased a strip of land that bordered the cemetery, adjacent to the graves of members of his family. And Clara — that is, Clara Körner — was buried beside them, with a recumbent headstone of white marble that looks just like my daddy’s headstone. Later a brick wall was built around those graves to enclose the plot of land where, to this day, members of the Körner family, including some of my own relatives, are buried next to Clara. It’s as if Jule drew a circle of love in brick to say to the whole world, “This is what our family looks like, and it’s also what God’s family is supposed to look like.” 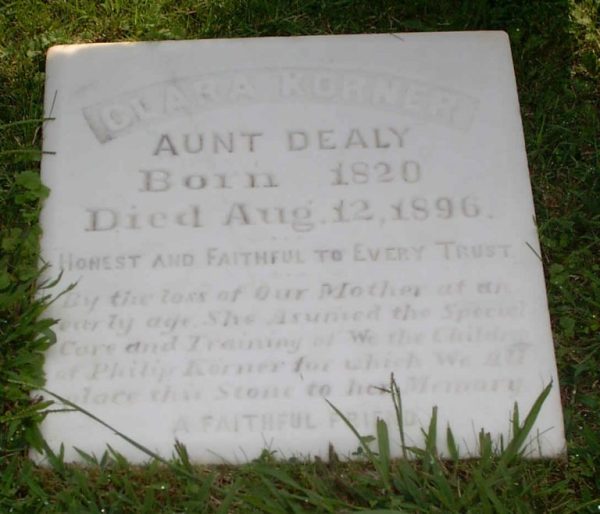 That’s what Saint Paul was trying to say in his letter to Philemon and to the rest of the house church that met under the roof of Philemon’s own Körner’s Folly. That letter was read to us this morning in its entirety, just as it would have been read to them. Paul was writing on behalf of Onesimus, a man enslaved by Philemon in an era and under conditions that were different than slavery in nineteenth-century America. Nevertheless, it was a brutal institution for the majority of those trapped in it. Slavery in the ancient world also existed with the absence of any kind of abolitionist movement or any thought that such a movement was even possible.

Yet it would be possible for Philemon to welcome Onesimus back into his household in the same way that Philemon would have welcomed Paul himself — as a sibling in Christ, a beloved sibling in Christ. Paul might even be strongly hinting not only in his earlier words but also at the very end of his letter that Philemon should grant Onesimus his freedom so that he could return to Paul as an assistant during Paul’s imprisonment. Most of the circumstances that occasioned this letter aren’t really clear. But what is clear is that the circle of divine love that has been drawn around us by God in Christ has changed the relationships between us. And that’s true even if we don’t see it, like it, or admit it. As a community of Christians, we live within the boundaries of a kingdom not of this world. And love and mercy are signs of it.

To be clear in my own words, my prayer for each of us is not that we’ll leave to draw circles of love with bricks or walls. Rather, I ask the Holy Spirit to work through us today in small, concrete acts of love and mercy, and to help us remember that a glorious day is coming when wrongs will be righted, including our many mistakes, including the injustices of this world in every generation, and God shall be all in all.

A verse from a well-known Christmas carol, referring to Jesus, puts it this way:

Truly he taught us to love one another;
His law is love, and his gospel is peace;
Chains shall he break, for the slave is our brother;
And in his name all oppression shall cease.

1 BACK TO POST This sentence is carefully worded because it’s unclear to me when Clara Körner was legally freed. The official website of Körner’s Folly states that she was manumitted by the Körner family and implies that she helped to raise the six children of Philip and Judith Körner as a freed woman. According to the personal recollections of the Körners’ grandson Jules Gilmer Körner, Jr., in his book Joseph of Kernersville, Philip “owned” several other enslaved persons, abhorred the system of slavery, “opposed secession in every way he could,” and “advocated the gradual emancipation of slaves with legal guaranty [sic] of their rights as freedmen.”

The grandson further states that Philip had a succession of wills prior to 1865 that “always provided that upon his death his slaves should be transported to a free state and given their freedom.” He specifically states that Philip’s will of June 14, 1860, makes that very provision for Clara “unless it can be so provided for her that she may have her full freedom here.” His final will, signed post-emancipation in 1873, lists his second wife Sallie, who is my fourth great-aunt, his children, and Clara as beneficiaries. In a related indenture, also signed in 1873, Philip refers to his wife, children, and Clara as “composing my family.” That same document later requires money in the amount of one half of the appraised value of a mill to be divided into eleven equal parts, with one share each going to his wife, his children, and Clara.

So there is definitely a trajectory toward freedom in these stories and documents, although some confusion remains about when Clara was granted that freedom.

2 BACK TO POST It does seem to be the case that Clara Körner was denied burial in God’s Acre on the basis of her racial heritage. And with respect to the wider cultural landscape, over the next few years, racism would again be enshrined in the laws of North Carolina in ways that might not have been imagined during Reconstruction. The “other side” of the story is that Clara wasn’t a member of that church, which was the stated reason for refusing the burial. However, the church could have allowed it. One is reminded here of the difference between the letter and the spirit of the law.