Years ago I arrived early to officiate at a graveside funeral in Hollywood Cemetery in Richmond, Virginia, and had plenty of time to walk alone through a nearby section with more than 18,000 graves of enlisted Confederate soldiers. Even though I do not embrace or glorify the Confederate cause, as some of them who were conscripted also surely didn’t, I just stood there silently, overwhelmed by the tragedy of it all.

South of Richmond, in the City of Petersburg, is a less well-known burial ground called Blandford Cemetery, second in size in that commonwealth only to Arlington National Cemetery. In the section for Civil War soldiers there at Blandford are buried about 30,000 Confederates, of which only about 3,700 have names and other information attached to them. Those burials are grouped by the states from which they came, row after row of mostly anonymous graves, and row after row of grief. 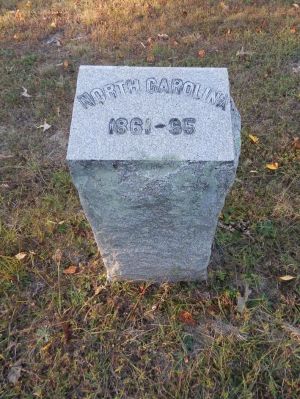 Even the identified graves at Blandford have the same generic headstones as the anonymous graves, without any names on them. They look like this one, which marks the grave of Thomas B. Powell, who is my great-great-great-grandfather. On March 14, 1862, he enlisted and served as a private in the “Caswell Rangers,” which later became Company C, 3rd Regiment, North Carolina Cavalry (also known confusingly as the 41st Regiment, North Carolina Troops). He was buried here on August 23, 1864, which was the same day he died in a hospital during the Siege of Petersburg.

Powell had been a patient at the Confederate States Hospital, only one of numerous Confederate hospitals in Petersburg that cared for wounded soldiers. Inside that hospital were hundreds of beds across three floors of a building that had previously been a tobacco factory. This photograph of it was taken at some point in 1865.

Nearly six months after Powell died in that hospital, a Confederate cavalry officer named George William Beale was admitted there. After the war, he wrote a book that included a chapter about his experience as a patient. This is what he saw:

. . . there were those in every stage of convalescence and others in every stage of physical decline and approaching dissolution. Many from horrible wounds were suffering intense pain, with no heart-rending screams, but with clinched fingers and grim writhings of face and heavily suppressed moans and groans that bespoke horrible agony.

Beale, who later took his meals at his bed, finding that his appetite decreased daily, describes in the quote below his first — and last — communal supper there:

That which impressed me most during this meal was not its poverty, scantiness and meanness, so much as the feeble motions, trembling limbs, wan and cadaverous appearance of those who partook of it. Sidney Smith tells of a corpulent person, who, suffering from the intensity of the heat, wished that he might divest himself of his flesh “and sit in his bones.” Most of my comrades at that hospital table had nearly reached the attenuated state of such a wish. Their cheeks were hollow, their eyes sunken, their countenances dejected and forlorn, and a ghastly pallor appeared in their faces. A few feeble candles lit up the gathering darkness of the long room, cast a pale and sickly light on the group, and made me feel much as though I had entered some dim Plutonian chamber and was breaking bread (that was all there was to break) with pallid shades of the dead.

As an Episcopal priest, I cannot read these words without imagining it as a kind of prelude, however strange, to the heavenly banquet, with an unexpected guest list — all of them wounded and sitting in the shadow of death, many of them very much ungodly and unloving in the cause for which they fought, some of them desiring freedom from earthly tortures while still believing the torture of enslaved Africans was divinely ordained within the pages of the Bible. Good Lord, deliver them and us from ourselves, and be our guest at this table that we, however undeserving, might be guests at your Table, the wrongs within us and around us having been righted.

I know that sounds offensive not only to those who refuse to see white supremacy woven into the fabric of the Confederacy but also to people who are only able to conceive of God’s justice purely, without mercy and forgiveness and the power to dismantle, destroy, and conquer forever the evil that resides within a human heart. Yet this passage from the Epistle to the Christians in Rome often comes to mind:

For while we were still weak, at the right time Christ died for the ungodly. Indeed, rarely will anyone die for a righteous person — though perhaps for a good person someone might actually dare to die. But God proves his love for us in that while we still were sinners Christ died for us. Much more surely then . . . will we be saved through him from the wrath of God. For if while we were enemies, we were reconciled to God through the death of his Son, much more surely, having been reconciled, will we be saved by his life.[1]

Beale observed that when a patient had taken a turn for the worse and was deemed almost certain to die, a yellow card was placed on his cot over his head. When death had become the last visitor to a such a man lying in great weakness, four black men, enslaved or free, would bring a stretcher and bear the body away for burial. He said that once, late at night, a soldier dying near him asked them to sing hymns so that, as Beale described it, he would depart from this life “on the wings of holy songs that he loved.” I have to wonder if those singing could imagine true freedom not only in the world to come but also in this world — for themselves and their families.

Another time, closer to the early morning, Beale was awakened by the rattling of the apothecary bottles that were stored near him on shelves. A delirious man lying on the cot next to his own, with a yellow card hanging over his head, had apparently decided to take matters into his own hand. By morning’s full arrival he was dead. Then, as they did for saint and sinner alike, for patients who treated them well and those who didn’t, the usual crew of four came to take away his body, finally at rest.

I don’t know how my great-great-great-grandfather died within those walls. But I do know a lot of other things about him. That’s because of a legal case, Powell v. Cobb, adjudicated by the North Carolina Supreme Court in 1856. One of the rulings in that case about striking “scandalous, impertinent, and irrelevant matter” appeared in legal footnotes as late as 1961 in Rules of Practice in the Supreme Court of North Carolina. And here’s a reference to it from 1950 in The North Carolina Law Review:

So, yes, it’s true what you’re thinking. There is indeed scandalous behavior by Powell that shall be revealed in my next post, which I am delighted to know you will now read in its entirety. The whole situation was unseemly, even biblical. Yet in the spirit of 16th-century reformer Martin Luther, I think it is important to see things not as we wish them to be, but as they really are, including things in our own lives today.

2 thoughts on “The Last Supper in a Confederate Hospital”