A few days after Thanksgiving, we started a new year together in the life of the Church on the First Sunday of Advent. It was the beginning of a several-weeks-long season to prepare ourselves to celebrate the birth of Jesus.

Our first reading on that Sunday opened with the thunderous words of the Prophet Isaiah as he cried out to God, saying,

O that you would tear open the heavens and come down, so that the mountains would quake at your presence.[1]

Those words came rushing back to me as I read in the Gospel of Mark the description of the baptism of Jesus. His cousin John, called the baptizer, the plunger, was fearsome in the presence of those who came out from their cities and villages to the wilderness and dared to wade in the waters of the Jordan River and stand before this man clothed in the hair of camels.

But John wasn’t fearsome in the presence of Jesus. The one whose birth we celebrated at Christmas stood there and waited for this wild man, surely more than a little hesitant, to pour water over his head. In doing so, Jesus got into the muddy water with all of us, with all of humanity.

Although spartan, as usual, with its words in describing this scene — more spartan, in fact, than the summary I just gave you — Mark’s Gospel paints a surprisingly vivid picture of Jesus coming up out of the water. It says that “he saw the heavens torn apart” as the Spirit of God descended on him.[2] Try to imagine divine love flooding through that breach, strengthening Jesus for the ministry to which he would soon turn his attention.

The word used to describe the heavens being torn apart is schizomenous in Greek. You can hear in that pronunciation the distant echo of part of another word, a word from the world of medicine, schizophrenia in English — a splitting of the mind. Not surprisingly, there are many kinds of tearing, like schizophrenia, that can be destructive and harmful and painful to ourselves and those around us. It can happen not only to our minds, but also our bodies, our spiritual lives, our relationships with family and friends.

It can also happen to our political fabric as a nation. It has happened.

We saw that in tatters this past week, watching in real time the events that unfolded inside the United States Capitol building in Washington, D.C. Doors were barricaded, weapons were drawn, and men and women were terrified, afraid for their lives, inside the People’s House. And all of that happened on the Christian Feast of the Epiphany — a day that usually brings to mind images of light and glory, brightness and illumination. 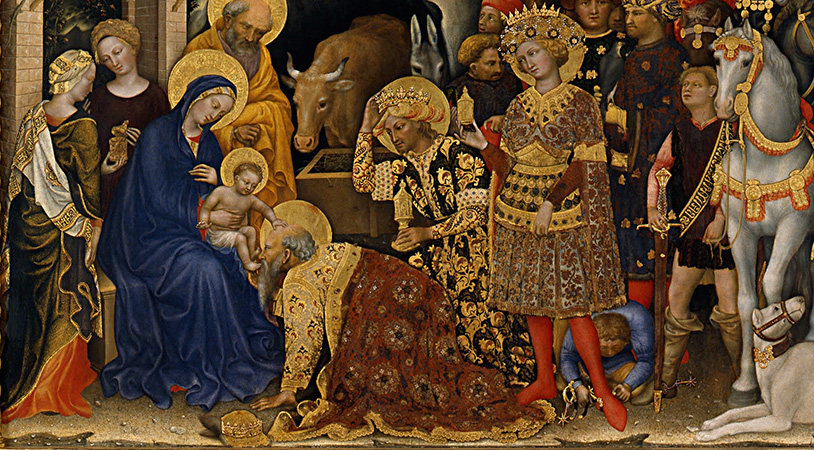 But the image that’s seared into my memory this year is a photo of the west side of the Capitol as the sky’s beginning to darken and clouds of chemicals above the mob outside are backlit by some kind of enormous flash that seems as brilliant as the sun. Looking at the photo, one could easily mistake the orange glow from inside the rotunda as a fire, which harkens back to British soldiers burning our symbol of democracy in the War of 1812. 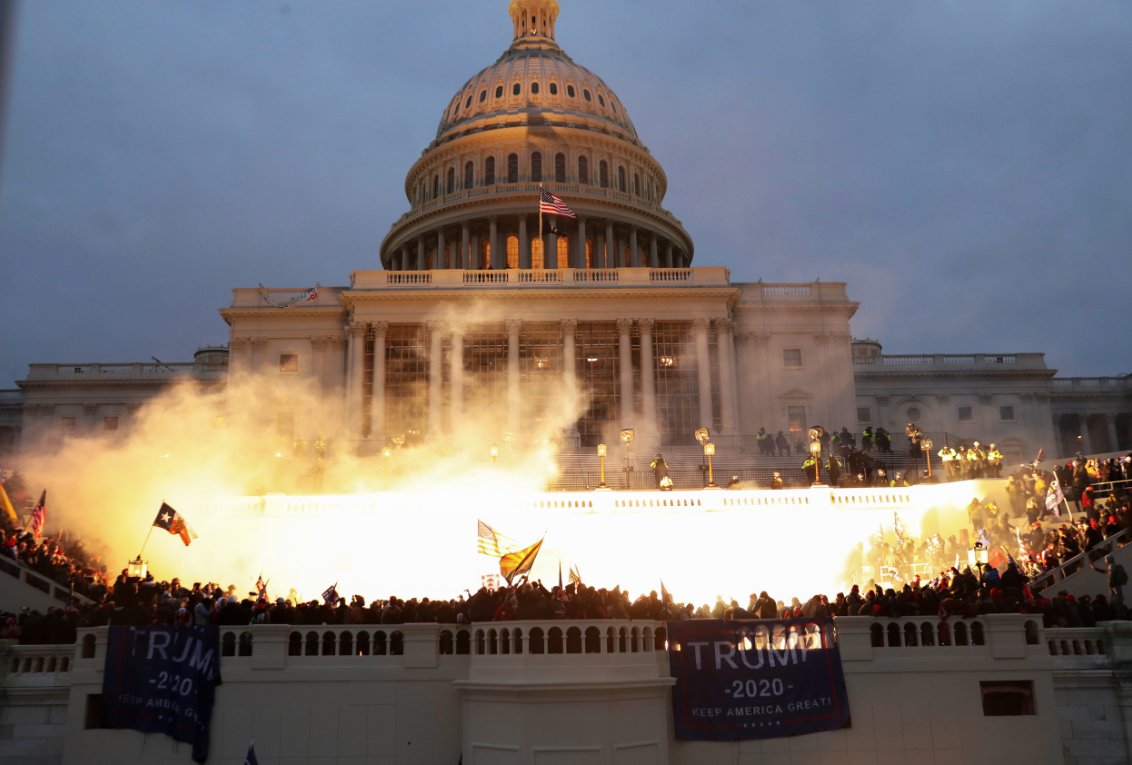 In contrast to that, today’s feast — The Baptism of Our Lord Jesus Christ — reminds us that there are other kinds of tearing apart that are liberating, that empower us, not to do our own will, but to do God’s will. We see that in the outpouring of the Holy Spirit as Jesus stood up in the Jordan River.

One might say that our own baptism into the death and resurrection of Jesus tears open our hearts as each of us emerges from that sacramental bath, washed in waters of mercy, forgiveness, and rebirth as God’s children. The Holy Spirit makes a way where there is no way, setting us free from the bondage of sin, flooding our hearts, and overflowing into the world.

One way to keep our hearts open, breached to be filled with love rather than hate, is through prayer. You’ve probably noticed, and perhaps even been confused by, language that points to one of the main prayers we use in our worship on Sundays. It’s printed in the bulletin as “The Collect of the Day.” Now you wouldn’t be the first person in the history of the world to think we’re about to take up an extra collection at the beginning of the service.

Although, in a way, that is exactly what we do. It’s about “collecting up” the concerns of each of the members of the congregation, this congregation, into one prayer — a prayer for that particular Sunday. And these collects, which can easily be found in the Book of Common Prayer, are a great treasury of spiritual riches for all of us, mostly from Thomas Cranmer.

He was Archbishop of Canterbury and architect of the English Reformation in the 16th century. A handful of these prayers he composed on a blank canvas, so to speak. Most of them, however, he tweaked from the Latin prayers he inherited. What I mean is that he made sure the em-PHA-sis fell on the right syllable, so that each prayer pointed not to what we do own our own, but to what God is doing in us and through us as Christians. What we then do is motivated by that grace, that love, that mercy.

Today’s collect, which doesn’t come from the 16th century, asks God to strengthen us to “keep the covenant [we] have made” at our baptism as Christians and “boldly confess [Christ] as Lord and Savior.”[3]

One of my favorite collects, which Cranmer wrote himself, asks God to help us “read, mark, learn, and inwardly digest” the holy scriptures so that, “by patience and comfort of [God’s] holy Word, we may embrace and ever hold fast the blessed hope of everlasting life, which [God] hast given us in our Savior Jesus Christ.”[4]

A few of the collects describe quite plainly what all the rest are really trying to say. One begins this way:

O God, forasmuch as without thee, we are not able to please thee, mercifully grant that thy Holy Spirit may in all things direct and rule our hearts.[5]

Another that we’ll pray in the season of Lent, in the weeks leading up to the celebration of our Lord’s resurrection on Easter Day, asks God to help us “love the thing which [God] commandest, and desire that which [God] dost promise, that so, among the sundry and manifold changes of the world, our hearts may surely there be fixed where true joys are to be found.”[6]

If we can’t do that on our own, why wouldn’t we at least ask God to help us, to bring us home to himself again by turning our hearts toward him?

Some will hear me saying this and think to themselves that I’m somehow discouraging informal, extemporaneous prayer. To that I say, “Far from it.” Becoming familiar with these collects in the Book of Common Prayer can expand your own vocabulary of prayer, as some of these beautiful phrases in them become folded into your own prayers, in your own words. They can teach you how to put the right emphasis on the right syllable.

And for those who are maybe a little or a lot anxious about a conversation with God, even though merely breathing in and out can be a form of that, do not despair. Let these collects, these prayers, be your own prayers.

In his short story called “A Father’s Story,” Roman Catholic fiction writer Andre Dubus wrote about someone who sincerely wants to be able to focus his attention on the mystery of Christ’s presence in the Eucharist. But he’s too easily distracted and fails every time. At least it feels that way.

This character, who is just like so many of us, then says:

. . . I cannot achieve contemplation, as some can; and so, having to face and forgive my own failures, I have learned from them both the necessity and wonder of ritual. For ritual allows those who cannot will themselves out of the secular to perform the spiritual, as dancing allows the tongue-tied man a ceremony of love.[7]

That last image is stunning — a dance allowing the tongue-tied person a ceremony of love. And that’s what the collects invite us to experience as the tongue-tied followers of Jesus. Their words ask God to keep our hearts open, as they were torn open at our baptism, renewing in us as individuals and as a community the gift of wonder in the Holy Spirit’s presence among us — yes, even now, in the midst of all the things that are happening.

My prayer for you is that you’ll reach out for that gift. Actually, no, it’s not.

I need to say that differently because my prayer for you is that God will grant you that gift, reaching out to you and enabling you to receive it anew. And my prayer for this American commonwealth of which we are a part is found in the words of the Collect for the Nation in the Book of Common Prayer:

Lord God Almighty, who hast made all the peoples of the earth for thy glory, to serve thee in freedom and in peace: Give to the people of our country a zeal for justice and the strength of forbearance, that we may use our liberty in accordance with thy gracious will; through Jesus Christ our Lord . . .[8]

7 BACK TO POST Andre Dubus, “A Father’s Story” in Selected Stories (New York: Open Road Media, 2010). There is no pagination in this book.

One thought on “The Epiphany in Washington, D.C.”