On the day my wife Carrie and I first met in Williamsburg, Virginia, she also met, not surprisingly, my dog. Georgia was an English Cocker Spaniel with blue roan markings. Georgia’s tail was in constant motion, at least it often seemed that way. It was so much fun to take Georgia on a long walk through the streets of Colonial Williamsburg because she loved the attention she got from tourists and thought the fifes and drums were for her and her alone.

Less fun, at times, was eventually taking her for walks in the park near our house. There was a walking path around it, and sometimes, late at night, Georgia would suddenly decide that she had gone far enough. She would just stop and lie down on the ground, and no amount of coaxing could get her to move even an inch. I’d have to carry her in my arms, and she felt heavier with each step back to the house. It must have been quite a sight to behold.

I’m guessing a lot of us have felt that way ourselves at some point during the truly awful events of the past week, with all 254 counties in the State of Texas under a winter storm warning and dangerous, record-breaking low temperatures. Here in Houston, that extreme cold, combined with no electricity for one, two, or three or more days, which for most of us meant no heat, left us on edge. If you were starting to panic as Wednesday arrived with no apparent end in sight to the misery and no good alternative place to find shelter with warmth or water, you weren’t alone. A lot of us felt that way. And there were and will continue to be thousands of Houstonians living in homes less insulated from the cold than our own. That’s scary.

Surely we’re all tired of living in historic times, tired of enduring historic events. We’d like nothing more than to lie down right where we are, to be picked up in someone else’s arms and carried home, to have the electrical grid fixed, and the laundry folded, and the dishes washed, and the pipes unfrozen, and the loose ends at work tied up neatly, and children reassured — and, yes, ourselves too — that the world isn’t coming to an end.

But if it isn’t coming to an end, if the world is sticking around, we’d like a divine work crew to come into the wreckage of our lives, a metaphorical building with untold, and perhaps unseen, water-damage and unreliable power, to clean up the mess because we’re too tired to do it ourselves.

Whenever my wife and I used to take our dog on a walk around that park at night, our way was always guided by the bright lights around Kidsburg. That was the name of an amazing community-built playground in the middle of the park. And what stood at the heart of it was an impressive structure that resembled a boat. Even in the darkness, it remained an illuminated place of safety against the backdrop of a vast celestial sea. It always reminded me of Noah’s ark — a place of safety, a vessel of salvation — and of the idea at the heart of that odd story in the pages of the Bible that a living community, created by and dependent on God’s grace, is able to renew the earth.

Now if we’re being honest about things, the story of Noah is more than a little unsettling and not really meant for children. After all, this story, which appears in the first book of the Bible, describes a flood that nearly destroys everything. What this and other stories in the opening chapters of Genesis give us is a theological interpretation of the world as we actually experience it. They also remind us of God’s involvement in that reality right now.

In the words of Genesis, the great flood comes after violence and corruption have spread over the face of the earth. This story — again, not a children’s story — unfolds with the most terrifying theology we can possibly imagine:

Yet we know from the rest of the story, of course, that creation doesn’t experience God’s total eclipse. As the rains fell and the waters rose and the storm increased, some were saved. Noah, his family, and all the animals with them were gathered together in the ark. This boat, which God had commanded Noah to build, kept them all safe from the violence outside.

Many of you have been there yourselves, in the real lives you’ve lived, after tremendous personal trials in the past. Some of you are dwelling in that deafening silence right now. Only then do we hear the climax of the story:

God remembered Noah, his family, the living creatures around them. At that moment chaos receded with the floodwaters and creation was renewed. 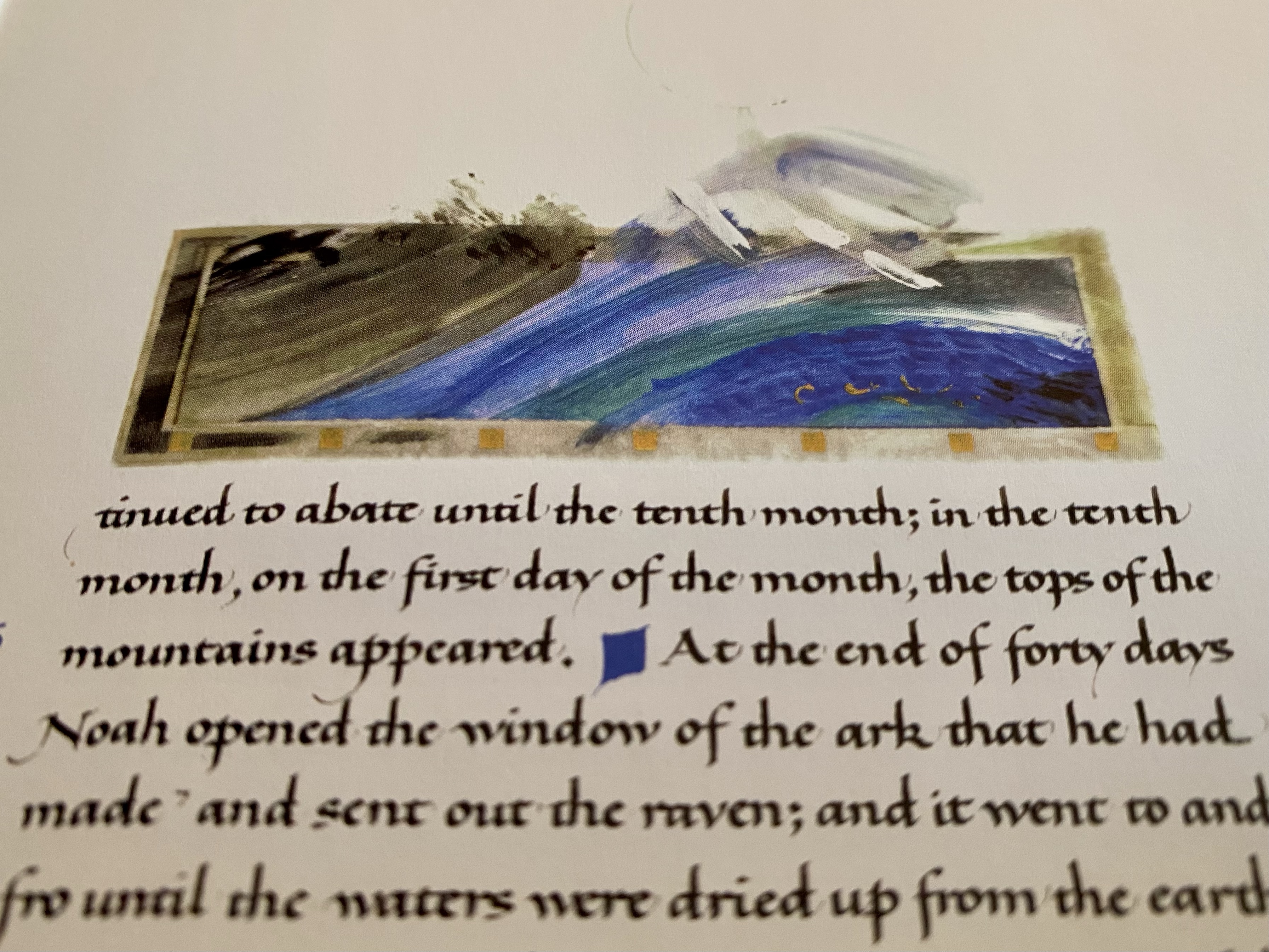 God said, “Never again,” and made a covenant between himself and the whole earth.[5] It’s not an agreement between two parties, but “a sheer promise from God” that is universal and unconditional.[6] There’s nothing here about what we are supposed to do in our disorientation and total exhaustion. This promise shines in the darkness as a beacon of hope for those who are weary and heavy-laden. God alone takes on the obligation of the promise, assuring us that chaos won’t have the last word.

And it’s not a story that finds meaning only in the lives of primitive human beings. The people of Israel understood that. When they were sent away into exile in present-day Iraq, the story of the flood became a reality in their own lives. It was for them “the collapse of the known world.”[7] Yet a remnant was preserved and saved for a new life that God would lead them back to.

God remembered them just as he had remembered Noah in the story of the flood. Isaiah the prophet testified to this miracle of salvation, this rescue, at the end of their captivity. In the Book of Isaiah, we read these words:

This is like the days of Noah to me:
Just as I swore that the waters of Noah
would never again go over the earth,
so I have sworn that I will not be angry with you
and will not rebuke you.
For the mountains may depart
and the hills be removed,
but my steadfast love shall not depart from you,
and my covenant of peace shall not be removed,
says the Lord, who has compassion on you.[8]

Christians also understand new beginnings in catastrophes. When Jesus was crucified, darkness covered the earth, and the storm of God’s wrath against sin was overwhelming. The hiddenness of God was real that day, and the silence which continued into the evening was absolutely devastating.

But God remembered Jesus. And God remembers us too, bringing new life out of the waters of baptism. Notice, again, how God does all the heavy-lifting, bearing our burdens, offering us rest, adopting us as his children, welcoming us into his household, bringing us home at last to himself.

With the assurance that God remembers every living creature in the colors of the rainbow, we gather around the Lord’s Table to remember as well.

Here we remember those mighty acts of God that are bringing forth a new creation. Jesus was not forgotten . . . and neither are you . . . and neither are those who are still suffering. The window of the ark has been opened, and a dove has brought back, as the story of Noah puts it, “a freshly plucked olive leaf.”[9] That small but tangible sign of hope for all of us this morning can be seen in power restored last week, in food and safe drinking water being distributed throughout the city this weekend, and in our prayers arising this hour for God’s universal and unconditional mercy for all living creatures.

God remembers them and us.

2 BACK TO POST Jurgen Moltmann, In the End – The Beginning: The Life of Hope, translated by Margaret Kohl (Minneapolis: Fortress Press, 2004) 39. I have substituted “creation” for “the earth” in this quote.