At the end of last month, the New York Times published an article with news about an important essay from the 19th century that was recently discovered at the New York Public Library. Written in either 1855 or 1856 and titled “Individual Influence,” it’s “a roughly 500-word sermonlike meditation.” Near the end, the author notes his belief that “all influence opposit to divine perverts human nature into brutality from infancy into distant years.” Those words were written in the handwriting of a slave from Chatham County, North Carolina, named George M. Horton and “belonging to Hall Horton.” This slave had taught himself how to read with a Wesleyan hymnal. 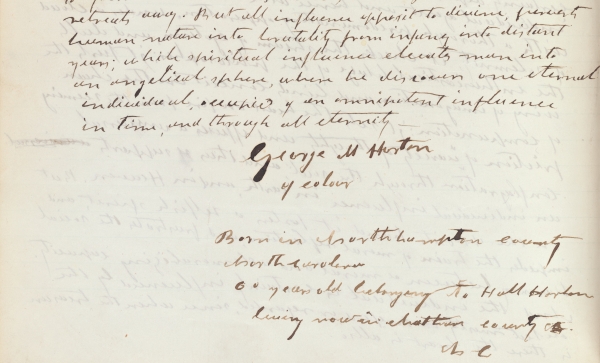 Horton was a poet who sold his verses to undergraduate students at the University of North Carolina in Chapel Hill. While he never made enough money to purchase his freedom, he did make enough to buy his time back from his master. So he spent his days working on the campus and writing poems. “Liberty and Slavery” protested his status in bondage and was the first of his verses published in a newspaper. In 1829, Horton “became the first African-American in the South to publish a book.”

The manuscript of “Individual Influence” was kept by Henry Harrisse, “a French-Jewish immigrant who arrived in Chapel Hill in 1853.” Harrisse was ridiculed and harassed by his students at the university, who were “mostly the sons of wealthy [slave-owning] planters.” He made a scrapbook with Horton’s essay, documents related to his problems with his students, and articles about Benjamin Hedrick.

A native North Carolinian, Hedrick was graduated at the top of his class from the University of North Carolina in 1851. He returned to teach there in 1854 after studies at Harvard University in Massachusetts. When asked by a few students if he would support John C. Frémont as a Republican presidential candidate, Hedrick answered honestly that he would. Soon thereafter, a newspaper article was published that “[advocated] the ouster of those with ‘black Republican opinions’ from the colleges and seminaries of the state.” Here’s part of his public response to the controversy:

I cannot believe that slavery is preferable to freedom, or that slavery extension is one of the constitutional rights of the South. . . . Born in the “good old North State,” I cherish a love for her and her people that I bear to no other State or people. It will ever be my sincere wish to advance her interests. I love also the Union of the States, secured as it was by the blood and toil of my ancestors; and whatever influence I possess, though small it may be, shall be exerted for its preservation.

Two weeks later the faculty and trustees of the university voted to dismiss him.

Chatham County, North Carolina, was home not only to slave George M. Horton but also to slave-owner Daniel Hackney, Jr., who is my great-great-great-grandfather. Hackney represented the people of Chatham County during the 1840s and 1850s in the House of Commons, as the lower chamber of North Carolina’s General Assembly in the capital of Raleigh was then called. He was a member of the Whig Party but, after the disintegration of that political party in the 1850s, he became a Democrat.

Hackney appeared on what was described as the “Democratic anti-Know Nothing ticket” in Chatham County for the General Assembly. They were opposed to the Know Nothing candidates, who were anti-immigration, anti-Catholic, etc. Because he had switched political parties, people were very interested in Hackney’s opinions about the 1856 presidential election. Hackney’s preferred candidate was former President Millard Fillmore, who was the last member of the Whig Party in the White House. Although the American “Know Nothing” Party nominated Fillmore as their presidential candidate, Hackney’s support of him shouldn’t be seen an endorsement of Know Nothing policies. That’s made clear in this letter about Hackney that was front-page news for The North Carolina Standard newspaper in Raleigh:

In 1844, when Hackney first ran for the House of Commons, his name appeared in various newspapers on a list of candidates for the Whig Party. Sometimes the announcement included candidates all the way up to Henry Clay for President of the United States. This example, from The Raleigh Register newspaper, included information about an important and very hotly debated national issue — possible annexation and statehood for the Republic of Texas.

My great-great-great-grandfather belonged to the political party that was opposed to a hasty annexation of Texas. Many Southerners viewed Texas statehood as a way to expand and protect the institution of slavery. Some feared, however, that it could lead to a war with Mexico. In his “Raleigh Letter,” Henry Clay said he opposed the annexation of Texas “at the present time.” It was meant to suggest to anti-slavery Northerners that he stood against the expansion of slavery, while placating pro-slavery Southerners with the strong hint that he would welcome Texas in the future. Regardless of whatever good and noble things he may have endorsed as a private citizen, as an elected public official, and later as an ordained minister of the gospel, Hackney seems to have been consistent in his support of the institution of slavery in the decades before and the years during the Civil War. I wish that I could say otherwise. He was a man of his times.

Things might have turned out differently for him if the churches of the Sandy Creek Baptist Association, to which Hackney’s church belonged, had taken to heart their own words, rooted in the Christian gospel, in their partial, anti-slavery resolution in 1835. The inability of that association more than a decade later in 1847 to provide a clear — or any — answer to the question of whether it is contrary to the gospel for Christians to “keep [human beings] in bondage for life” explains why Hackney was able to represent his church at association meetings right up to the Civil War.

I also wonder how his life might have been shaped if he had received an education like Benjamin Hedrick, who was able to speak against slavery honestly and counter-culturally in spite of the cost to himself both personally and professionally. Unlike Hedrick, my great-great-great-grandfather was very popular. He received more votes than any of the other candidates in the race to represent Chatham County in the House of Commons. That victory would be repeated again and again and again.

But the juxtaposition of his name and the “For Sale” notice to the right of the list of Whig candidates below in The Greensboro Patriot newspaper is an unsettling visual reminder of what life was really like in North Carolina in 1844. While I can’t change the past, in the spirit of George M. Horton’s sermonic essay, my prayer today is that my individual influence, by God’s mercy and grace, will not be “opposit to divine.”

Click here to read all of the reflections in this series.