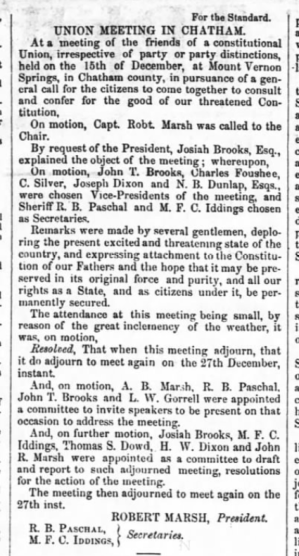 My great-great-great-grandfather Daniel Hackney, Jr., was first elected to the House of Commons in North Carolina’s General Assembly in 1844 as a member of the Whig Party from Chatham County. He served four two-year terms in a row, through 1851. After the dissolution of the Whig Party in the 1850s, he became a Democrat and ran for the same office in the same county on the anti-Know Nothing ticket in 1856. He served one two-year term with that new political identity. One letter to the editor in The North Carolina Standard newspaper, referring to Hackney’s opinions about the 1856 presidential election, claimed that he believed old-line Whigs and Democrats “ought to unite now to save the country by sustaining that candidate who would most probably beat the black Republican ticket.”

“Black Republican” was a disparaging term used to highlight the anti-slavery views of the Republican Party, which had only been formed two years earlier in 1854. The two-part article on the right from The North Carolina Standard newspaper describes a Union meeting that convened in Chatham County on December 15, 1860, and then again on December 27, 1860.

Many of the people who attended similar meetings in the Old North State were like Hackney. He was an as-it-was-with-slavery Unionist rather than an as-it-might-be-without-slavery Unionist. They believed the best path for protecting the institution of slavery was to stay in the Union, and that secession would likely result in slavery’s destruction. Although Hackney no longer held a seat in the General Assembly and didn’t make a formal speech at either of these meetings in Chatham County, he “was called out” to offer some remarks at the second gathering with the larger crowd and “explained his position as a constitutional Union man.”

The resolutions that were passed at that second meeting include a lot of highly qualified language. There is much concern expressed at the end about equal rights, not for individuals but for states. While the perception that states’ rights were being trampled upon fueled these debates, the fifth resolve hints at the real source of the anxiety: “That our Legislature should pass such strong retaliatory laws against those States which have attempted to nullify the fugitive slave laws, as in their wisdom may seem right and proper and in accordance with the Constitution of the United States.”

That becomes even clearer on January 4, 1861, at a meeting in Chatham County that was initially convened in response to President James Buchanan’s call for “a day of fasting, prayer and humiliation.” The President intended that as a way to calm the storm of unrest in the North and in the South following South Carolina’s ordinance of secession, which was adopted on December 20, 1860.

The meeting took place at Love’s Creek Baptist Church, where Hackney had served as a deacon long before he was first elected to public office. After the prayer service, Hackney, two ordained ministers, and two other men “were appointed a committee to draft resolutions.” The Fayetteville Observer newspaper noted that their work didn’t take very long:

Although Hackney and others spoke of their desire to preserve the Union, that was only true “provided that the Federal laws are faithfully executed and [their] rights of property respected.” As the first resolve plainly states, that property included enslaved human beings, and the will of the people gathered inside that Baptist church was that “citizens hereafter shall be unmolested in the enjoyment of said property.” My great-great-great-grandfather enslaved 14 people at the time he helped to write those words. That is a difficult but necessary truth to acknowledge. This really happened, and despite all of the rhetoric about states’ rights as the primary Southern issue, protecting the institution of slavery was the motive behind it.

North Carolina did not secede from the Union until May 20, 1861. The larger political story that led to that, including what happened on the ground in Chatham County, warrants its own reflection. It’s a story that’s not as simple as one might imagine it to be.

Unionists, both pro-slavery and not pro-slavery, won a state-wide victory in February of 1861 that, ironically, almost certainly aided the secessionist movement in the long run. Those on the losing side would make sure that next time there would be no popular referendum about whether to hold a secession convention and no popular referendum on its decision. When secession did become a reality, most “conservative” pro-slavery Unionists like my great-great-great-grandfather didn’t resist it. They joined it.

Click here to read all of the reflections in this series.