My father had an electrical contractor’s license, and I often rode in the pickup with him on our way to the church when he would stop by there for an hour or two to fix things. So I spent a lot of time as a kid running around that church in North Carolina where I was raised. Let’s just say this global pandemic isn’t the first time I’ve stood behind a pulpit in front of empty pews. It was great fun to be an explorer there.

Once I opened a storage closet and was surprised to feast my eyes upon a detailed architectural model of the whole campus. It didn’t include the tobacco fields that bordered everything on two sides of the church property. But it did include one building I had never seen — a church that wasn’t there in real life, a church in a spot where there was only grass. In this miniature, magical scene, I was seeing how the future had been envisioned long before I was baptized in that congregation.

The worship space that was familiar to me was on the first floor of a two-story building. It had beautiful dark wooden pews, and it looked like a traditional church on the inside. But all of that was meant to be temporary. Although forgotten by many, or even unknown to them, the idea had always been that, down the road, there should be a “real” church beside it. That idea came back to the surface in the late 70s, when my father was asked to serve as chair of the building committee.

The church that stands there now doesn’t look like the one in the model. It’s actually prettier than that one, and it was the last piece of a puzzle, completing the picture. But that doesn’t mean it wasn’t really hard for some people to move just a few feet away from one space to the other. Temporary or not, that old church interior was the one I had always known, where children were baptized, where tears were shed at funerals of friends and family, where prayers were offered for the forgiveness of sins. It’s also where bread and wine — well, red grape juice at least — became holy food and farmers and factory workers, nurses and teachers became holy people.

I was ten years old when the groundbreaking took place. That Sunday Daddy would get to use a brand new shovel, of course. But first we gathered inside the old church, and these are some of the words we sang in those pews from the Moravian Hymnal:

With joyfulness and longing, we look to thee, O Lord;
receive us in thy mercy, and cheer us with thy Word.
Crown us with loving kindness and promises of grace,
and let thy benediction abide within this place.

The years have all been crowded with tokens of thy love;
and many who here sought thee now worship thee above.
But we, O Lord, still need thee our pilgrim feet to stay,
for evil often triumphs as faith to fear gives way.[1]

I want you to know it’s ok to grieve being away from this building and the people who make it come alive, being away from everything you can see behind me, including this Table where we are reminded that God’s mercy embraces not only us but the whole world. It’s true that the real church is a congregation. But in order to be that, to be God’s people, we have to be gathered somehow. We can do that in the middle of a field or inside someone’s very large house, I suppose, or within these walls. We can do it this way too, although, between you and me, I think we both know this isn’t like singing together in the same room with everyone else. But we’re still God’s people, even in exile, still “a royal priesthood,” as we heard in the First Letter of Peter.[2]

That letter very much wants to turn our gaze from a building to a person, from the Temple in Jerusalem, made with literal stones, to Jesus Christ, a living stone that the builders rejected, that the world rejected. The good news of this Easter season is that God has graciously rejected our dreadful rejection, that God has said yes to us when we said no to him. But that doesn’t mean it’s wrong to miss all the places we’ve gathered through the years to hear that good news, longing to return to them.

Just a few days ago, downstairs in our columbarium, I officiated for the first time in my ordained ministry at a committal service alone. In the vestments I’m wearing now, I placed the ashes of someone’s mother in their final resting place, within this temple made of concrete and wood and plaster, paint and carvings and candles, things you can see and touch and even smell, with the aroma of incense that lingers in the air like the prayers of one generation after another still ascending to God.

Before I began that interment, I took a moment to stand there, surrounded only by silence. And I have to be honest with you, it didn’t seem real. It felt, instead, like I was about to practice something before the actual service, the one that would surely start later under different circumstances. Maybe over the last couple of months you’ve felt that way too. Maybe you’ve been wondering what’s real, whether seen or unseen, in the world beyond the walls of your house, or wondering what’s real as you find yourself sitting on your couch, pausing for a moment to worship in this hour within the safety of your home, hoping God is still near to you and not far away.

But then I opened the book in my hands and started to say the familiar words, words I knew had been said by generations before me, words I knew would be spoken by others that very same day in many places also nearly empty throughout the world:

Thou knowest, Lord, the secrets of our hearts;
shut not thy merciful ears to our prayer;
but spare us, Lord most holy, O God most mighty,
O holy and merciful Savior,
thou most worthy Judge eternal.
Suffer us not, at our last hour,
through any pains of death, to fall from thee.[3]

I knew in that moment I wasn’t alone, and neither are you. The words of Saint Paul came to mind, reminding me that nothing is “able to separate us from the love of God in Christ Jesus our Lord.”[4] The words of Sister Monica Joan came to mind too. She’s my favorite character in the BBC series Call the Midwife. “The liturgy,” she says, “is of comfort to the disarrayed mind. We need not choose our thoughts, the words are aligned like a rope for us to cling to.”[5] So that’s what I did. I held the rope.

Sister Monica Joan’s disarray is her own dementia. Your disarray might be inside your head too with your work or your relationships or your daughter’s homeschool project or your father’s unwillingness to put on a face mask in public. Or maybe disarray is literally surrounding you in your living room as you hear my voice now. 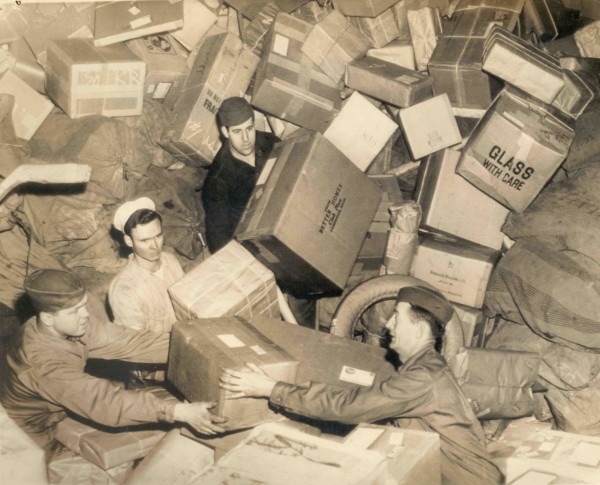 Whatever form chaos has taken in your life, there is something for you to cling to in the words of our prayers today. And most wonderfully of all, there is Someone who will catch you when you can’t hold on any longer. “Once you had not received mercy, but now you have received mercy.”[6] Of this we have been assured.

Together in Christ, we are — like him — living stones. And here, even now, in this very moment, we are being built into a spiritual house. That house described in First Peter, of which Christ is the cornerstone, is more real than concrete and wood and plaster, more real than things you can see and touch, more beautiful than this church. You have received mercy and forgiveness and the embrace of a loving Savior, “who called you out of darkness into his marvelous light” and will never, never, never let go of you, either in this world or in the world to come.[7] This I believe.